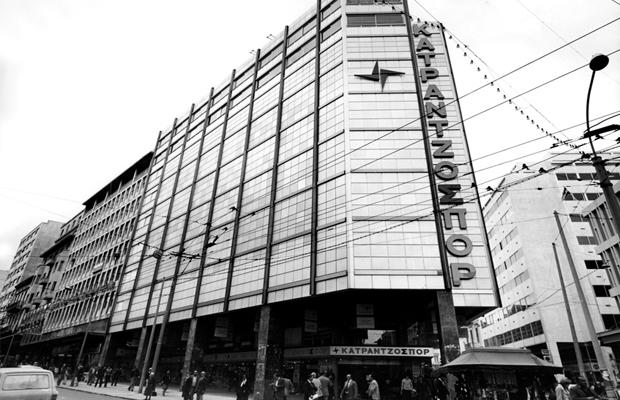 The Athens architecture city tour of its center was coming bit by bit to an end. The group of foreign Architecture students was following the ascetic young thin man who explained in detail every building they came across. Cutting through one of Athens’ main arteries, Stadiou Street, at the Haftia area, they stood by an angular fenced site. Its great commercial location raised the group’s question about it not having been built. With a melancholy tone our guide gave the site’s story.
Tracing back through urban legends, Athenian newspapers and architectural archives the story began to unfold. In 1972 the architecture study for the site’s multi storey department store, the pride of Katrantzosport, was being completed. The twelve storey trade lighthouse at the corner of Stadiou and Aiolou Streets was designed by architect Michael Photiadis. Its external cladding was white aluminum sheets in a modular square system within anodized brown frames and hidden lighting. From its ground-break at 7000 sqm, in a low profile business center, it made a great ‘Bang’ to Athenians.
Each floor had an area of 600 sqm, which was adequate for a city department store goods division in apparel distinctions of menswear, womenswear, sportswear, etc. The plan was a triangle with a chopped-off side. The ground level offered a daring cantilevered structure for unabstracting centrally placed dazzling numbered escalators offering an open view from within to the transparent glass shell between shop and sidewalk. A great air-curtin entrance sucked-in the crowd at the corner of Stadiou and Aiolou Streets.
Short seasonal use, specific coloring per floor areas, ceiling and vertical panels magnetized customers’ circulation. The space design used a modular 1,25m for the sale areas and goods exhibition, mobile elements, permitting flexible changes of use, color and look within a night and day. Air conditioning ducts were fitted within thin layered ceilings panels.
The building introduced quite a few innovations for its time. Sixteen escalators and three elevators each serving ten customers. Goods were handled through a separate vertical system. Customer habits were different from today. Children bought rubber shoes and wore uniforms at school. The ‘must’ sports brand was Sportex and a visit to this department store changed the young customer’ the ‘Big Winner’. The awe inspiring lettering carrying the name of the store, spanning from the elevation’s top to bottom, was the ‘craze’ for children of the day.
On the 19th of December 1980 an arson attack from a horror striking terrorist group devastated during the same night three department stores: Katrantzos, Minion and Klaoudatos. The full destruction of the department store ruined financially and psychologically the Katrantzos family stopping their ethical rebound. A few days earlier the Katrantzos firm had just covered all their dues and debts! The building was abandoned and demolished soon after. Today the site is fenced and obliterated. It is a black space hole for the family and those Athenians who remember.
This is the razor edged story of the thronging angular site at Haftia. The sun was setting. The foreign architecture students started walking back to Omonia square. The ascetic tour guide walked away thinking of two other Katrantzosport department stores that the family had built a few years earlier in Thessaloniki and in Crete’s Iraklion. 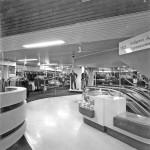